Get Matcha for its Healthy Energy: Stop Drinking Energy Drinks We have known for a decade the health problems that are occurring because of excessive caffeine intake specifically as a result of Energy Drinks.

Energy drinks have been widely consumed for that immediate energy boost. The FDA has investigated Energy Drinks for its lack of safety and harmful effects, it has caused as listed in these news reports.

These energy drink products contain the temporary energy rush consumers crave, they also contain a substantial amount of caffeine, sugar and other ingredients that can sometimes lead to serious side effects such as insomnia, an increased or irregular heartbeat, agitation, irritability and seizure, and possibly even death.

The issue with Caffeine in Energy Drinks

Keep in mind, caffeine isn't necessarily bad for you in moderate amounts. It's a mild stimulant that naturally occurs in a variety of plants, beans, fruits and nuts. This is however, the counter claim that the Energy Drink companies use to justify their products.

The concern is that in North America today, caffeine is being over consumed: coffee, colas, energy drinks and a variety of foods that have caffeine within their ingredients. If not carefully watched, the daily caffeine consumption could get easily out of hand, which eventually will take its toll on the adrenal glands.

The issue with Sugar in Energy Drinks

To compound the caffeine concern, energy drinks often have a heavy load of sugar. Every major food company like Coke, Pepsi, Nestle, Pillsbury, Kraft and McDonalds, and dozens of others, employee some of the highest paid food scientists. These very smart people have one primary focus, designing flavor, mouth feel and other things such that you just want to eat more and more of the foods they sell.

These food companies invest huge resources into one mission - designing foods that stimulate a never-ending desire for more of their food. Sugar has similar effects on the brain as addictive drugs, releasing dopamine and other ‘reward’ molecules that get us hooked on foods and drinks.

While Matcha is not marketed as an "Energy Drink" it does provide the sustained energy that everyone is looking for.

This gradual and consistent release of energy from Chi-Oka Matcha provides the body with just the right amount of caffeine over a longer period of time rather than dumping a huge amount of caffeine into the body all at once. Matcha still has the same immediate boost, but not the extreme rush.

Energy Drinks, on the other hand, gives you the ups and down and the caffeine crash. The caffeine in these drinks has an acid affect impacting the adrenal glands and causes spikes in adrenaline glucose and insulin levels, which causes the jitters, nervousness, sleeplessness and hunger pangs. Where the caffeine in Matcha forms bonds with numerous nutrients so that it enters the bloodstream in a time-release fashion, leading to a steady level energy over an extended period of time, rather than a spike and crash within 1 hour. 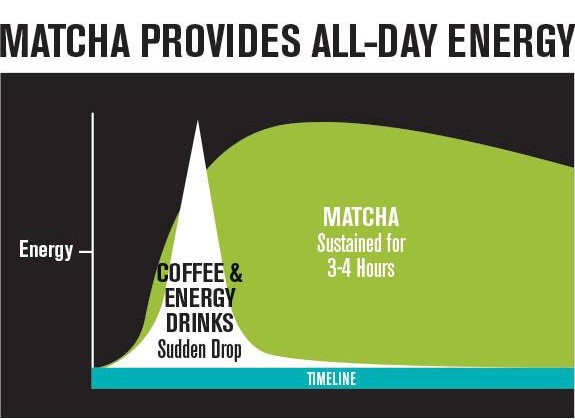 Matcha has a unique make-up, meaning that the caffeine leaves your adrenal glands untouched while regulating insulin and glucose levels making it ideal for diabetics, and for combating those hunger pangs.

These are so many reasons why the Japanese used the ceremonial Chi-Oka Matcha green tea, and it is taking the front stage in North American market today.

Matcha gives you all of the energy but none of the crash, and so many health benefits that if someone reads the research on Chi-Oka Matcha they will want to put this in their body every day.

How much Matcha Can We Drink?

Although the caffeine in Matcha green tea is different to that found in coffee and Energy drinks, it would still be still wise to limit your Matcha consumption on a daily basis.

1 gram serving of Matcha delivers 34mg of caffeine, this is less than an average cup of coffee so consumption does not necessarily need to be restricted too severely.

Matcha has long been used in Japan by buddest monks, warriors and martial artists because of the time release of energy by the energy drivers, caffeine and theophylline is at a rate that your body can deal with naturally while the powerful amino acid effect of the L-theanine relaxes and focuses. Matcha helps you to focus, enhancing your mental acuity.

Keep in mind that the caffeine will be utilized over a 3-to-6-hour time span, so you are not dealing with the typical caffeine issue that is found with energy drinks, colas, coffee and other caffeinated beverages.

With the Chi-Oka Matcha found in Unicity Matcha is considered a whole food, it is packed with so many vitamins, minerals, nutrients, antioxidants and even amino acids that it could literally sustain your body energetically and nutritionally for hours at a time. Matcha simply means "powdered tea" is made from aged green tea leaves.

Taking Unicity Chi-Oka Matcha is like getting the whole plant versus a partial food. Therefore, Matcha is much more concentrated in every possible nutrient. On a gram per gram basis has approximately:

The L-theanine in Matcha acts as a non-sedating relaxant that helps to increase the brains production of alpha-waves. L-Theanine is extremely effective for combating tension, stress, and anxiety without causing drowsiness. Matcha is a natural blood thinner, with numerous studies showing that green tea consumption helps to relax the arterial walls and lower blood pressure. Matcha is great for those wishing to lower their blood pressure.

Matcha has so many health benefits

Matcha has been known to boost your metabolism by as much as 40%, while helping to regulate blood sugar levels. Matcha helps the body to maintain healthy cholesterol levels, and Matcha is also known to be a strong blood detoxifier and alkalizer. Now is the time to try for yourself the healthy energy from Chi-Oka Matcha green tea.